I rarely think about the one Station of the Cross depicting Veronica wiping the tortured face of Christ as he makes His  way to Calvary. Nothing in Scripture supports this encounter, and yet it is one of the traditionsl 14 Stations. Two different depictions of Veronica wiping the face of Christ that I encountered in a church in the town of Domingo de la Calzada struck me for some reason. I was drawn to these two depictions of Veronica and her Veil.  This “veil”has been depicted in art countless times, particularly in the Stations of the Cross, but I never gave it a thought, until now.

A “veil” is a beautiful symbol in scripture and liturgy. People’s faces had to be “veiled” so that they could not see the Face of God directly. There is a hiddeness, a mystery,in being”veiled,” in that a complete and totally transparent encounter is elusive….a beauty is waiting to be exposed, but we are not yet ready for it.

Underneath the veil of Veronica lies the terrible beauty of suffering and sacrifice. We can focus on the IMAGE imprinted in the cloth that veiled His countenance for a brief moment. To “see” this tragic beauty is sometimes too hard to behold. The “veil” is a symbol of a mystery waiting to be revealed, only 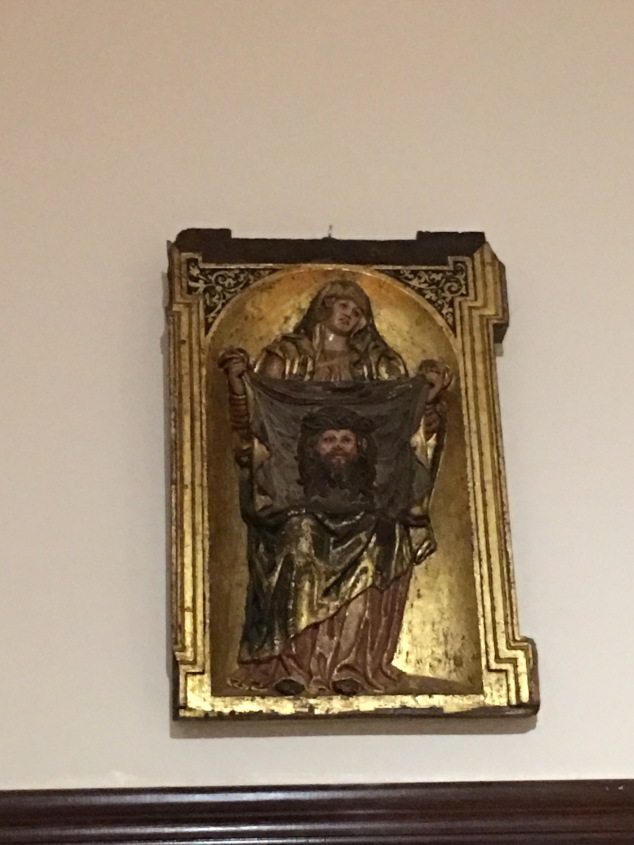 when we are ready. There is something poignant and moving about Veronica reaching out to comfort Christ is His agony with her ordinary cloth being transformed into a “veil” of mystery.

We never “cover” statues or sacred images during Lent, we VEIL them, allowing for their beauty to be UNVEILED at Easter. In the Resurrection of the dead,  when Christ returns to usher in the final eternal age of unending Easter, veils will no longer be needed for we will be able to encounter beauty in its utter fullness.

In the meantime, we honor Veronica and her beautiful Station, we honor the women who bare her name…Veronique… a name reminding us of the hidden beauty “veiled”in each of our humanity.